Wheat and Other Grains 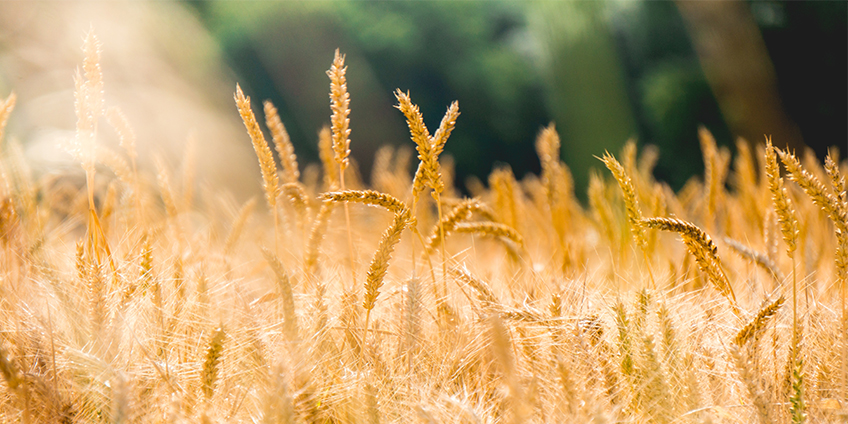 Viewers often ask me questions about the different types of wheat and which grains are safe to eat. Get ready for a grain of truth.

Is the problem wheat, all grains, or specifically gluten? Let’s break it down.

None of us have the enzymes to break down wheat thoroughly. Think of protein like a pearl necklace. Hydrochloric acid made in your stomach undoes the clasp of the pearl necklace. Now you have a string of pearls. It’s your enzymes produced by the pancreas, the gallbladder, the liver, and the microbiota in your gut that act as scissors to cut that pearl necklace into smaller clumps.

We think gluten is the culprit. Gluten is a primary culprit from poorly digested wheat, but there are many different types. That’s the thing about gluten and about grains in general.

Some doctors advocate eliminating all grains. This is not a bad concept. When people do that, they usually feel much, much better. I don’t recommend that to start with. It’s more difficult eating that way.

Otherwise, we recommend wheat-free, dairy-free, sugar-free. Then all of the possible hidden exposures to wheat, like grains that may have cross contamination through shared facilities. If they’re certified gluten-free, you should be fine. I like people to have a little grain.

If you don’t improve, then the next step would be go grain-free.

Spelt and kamut are also in the toxic family of gluten, so you should definitely avoid them.

Can You Eat Corn?

Over 90% of corn is GMO corn. Nobody should be eating genetically modified corn. E3 Advanced Plus has digestive enzymes that help you break down wheat, and they can also break down over 60% of the Bt toxin in GMO corn. Some people with a sensitivity to corn are only sensitive to GMO corn because of the sensitivity to the Bt toxin. They can eat organic corn fine. Other people may not.

If you can eat corn, only buy corn and foods made with corn that is organic. There is a Corn Zoomer test that can determine specifically which type of problem you may have to corn, if any. If you don’t have a problem with corn, many people use corn as an alternative grain in a gluten-free diet.

Does Rice Have Gluten?

Gluten is not bad for you. Bad gluten is bad for you. There’s gluten in rice, corn, quinoa, and most grains. But it’s the gluten proteins in wheat, rye, and barley that are nasty for everyone.

The gluten contained in rice is only a problem for some people. In rice, you also have to worry about arsenic because the rice grows in water. It sits in water all the time, and unfortunately, the irrigation water that we use in this country, and many places around the world, has lots of residue from insecticides and pesticides that are high in arsenic. Always shop organic whenever possible, as it reduces the likelihood of contaminants in your food.

When oats grow out of the ground, there’s no toxic gluten in them. When you buy oats off the shelf, there’s toxic gluten in them. The cross-contamination comes from the trucks that transport the oats that previously transported wheat. The trucks don’t get cleaned out, so trace amounts of gluten are left behind. If you’re shopping for certified gluten-free oats, they should be generally safe unless you have a sensitivity to oats. But for all of us, we should only be eating certified gluten-free oats — we don’t want exposure to wheat ever. Ever. Because in everyone, wheat will tear the lining of the gut. Everyone.

“I’ve heard that wheat in Europe is different.?”

Not true. The vast majority of people that have gut reactions to wheat is not because of the proteins in wheat. It’s because of the FODMAPs in wheat, the fermentable carbohydrates. They also have the immune response, which triggers all the systemic problems, but the gut symptoms are usually from the FODMAPs.

There seems to be a lot of consciousness in Italy about being gluten-free.

In Italy, if you want gluten-free food, you can go to the pharmacy and order gluten-free croissants, gluten-free pasta, or gluten-free biscotti. They’ll have it for you the next day- fresh. The government there gives credit. There are 37 centers in Italy that are certified by the government. If you get a diagnosis of a gluten-related disorder from one of the certified centers, your food bills are tax deductible.

Is Sourdough Safe to Consume?

I wish I could eat sourdough. I love sourdough. There are people saying “Well, when you eat sourdough, the proteins are easier to digest. So they should be okay.”

What’s the magic word in that phrase? Should. And the answer is “No. They’re not.”

Papers show that fermenting the dough does make it easier to digest. Still, if you have Memory B cells, you produce the antibodies. You activate the antibodies. You cannot fool Mother Nature. They’re trying. They’re really trying. They’re trying different sourdoughs. They’re putting enzymes in there when they’re making the sourdough, to see if they can partially break some of these proteins down ahead of time. But there’s nothing out there yet.

I do remember sourdough being amazing, but I don’t wish for any of the symptoms that came from those gluten days. It’s just not worth it. Just remember right now, if you’re struggling with this concept of giving up gluten, it’s so worth it. Besides that, all the cool people are gluten-free.

Wheatgrass is a food or a product that I often find my clients using, and it may be the reason why they’re still having elevated enzymes on the Wheat Zoomer or Cyrex Array 3X.

The Hippocrates Institute has been around for maybe 30 years or more. People go there when they’re really sick, and they get great results. They use a lot of wheatgrass juice. The problem is not at the Hippocrates Institute where they grow and harvest the wheatgrass. The problem is the commercial wheatgrass juice — somewhere between day 15 to day 17 of these little wheatgrass sprouts, the genes start producing protein. So if you harvest your wheatgrass juice around day 11, day 12, you may be safe. There’s not going to be any protein in it. There’s all the healing energy, the enzymes and the chlorophylls.

The green of wheatgrass is the life-giving force, which is one of the reasons why the Hippocrates Institute gets such great results — they grow their own wheatgrass, and they harvest it, I’m assuming, before day 15. That’s the issue with wheatgrass, and why you can’t buy the commercial wheatgrass. If you want to do wheatgrass, it’s great. It’s got a lot of healing benefits. I suggest growing and pressing your wheatgrass yourself, that way you can be sure you’re harvesting it at its optimal point for you.

If someone is sensitive to the proteins of poorly digested wheat, harvesting wheatgrass around day 11 is probably going to be safe for you. On the other hand, if someone is sensitive to the wheat amylase/trypsin inhibitors, which is another compound in wheat, it causes clots. It’s been associated with strokes, unexplained miscarriages, thrombosis, and many other different conditions. If that’s the case, you can’t have wheatgrass at all. So, be really careful.

A Safer Alternative to Wheatgrass

I suggest using the GS Immuno Greens products that we sell on the website. It doesn’t have wheatgrass or barley grass. Some people are really sensitive to gluten, and cannot do wheatgrass at all — in any stage of the growing process. It depends on where you are on this gluten-related disorder spectrum.

I use GS Immuno Greens in my smoothie. It’s really high in the ORAC value, which stands for the oxygen radial absorptive capacity, meaning it’s like a sponge. They soak up the free radicals in our body from all the toxic stuff we’re exposed to. It’s really great to use this powder. I put a scoop of that in my smoothie with a scoop of colostrum in there at the same time. Kids love it. It’s really tasty. It doesn’t have sugar, but it’s very flavorful. Just the fruit concentrates that are in it sweeten the drink.

There’s berry. There’s espresso. There’s chocolate, and they’re all certified gluten-free, so the company has done all the research, the double testing on that, which is great.

Do you know if you have elevated antibodies? Which ones? What to? You don’t know what you don’t know. Find out so you can properly address the right corrections in your diet.

I always recommend starting with the Wheat Zoomer test. Then check out the Grain Zoomer, Corn Zoomer, and Lectin Zoomer to get a baseline on where you stand with the grains you are eating (or avoiding). Check out our Zoomer Bundles to save on multiple Zoomer tests.